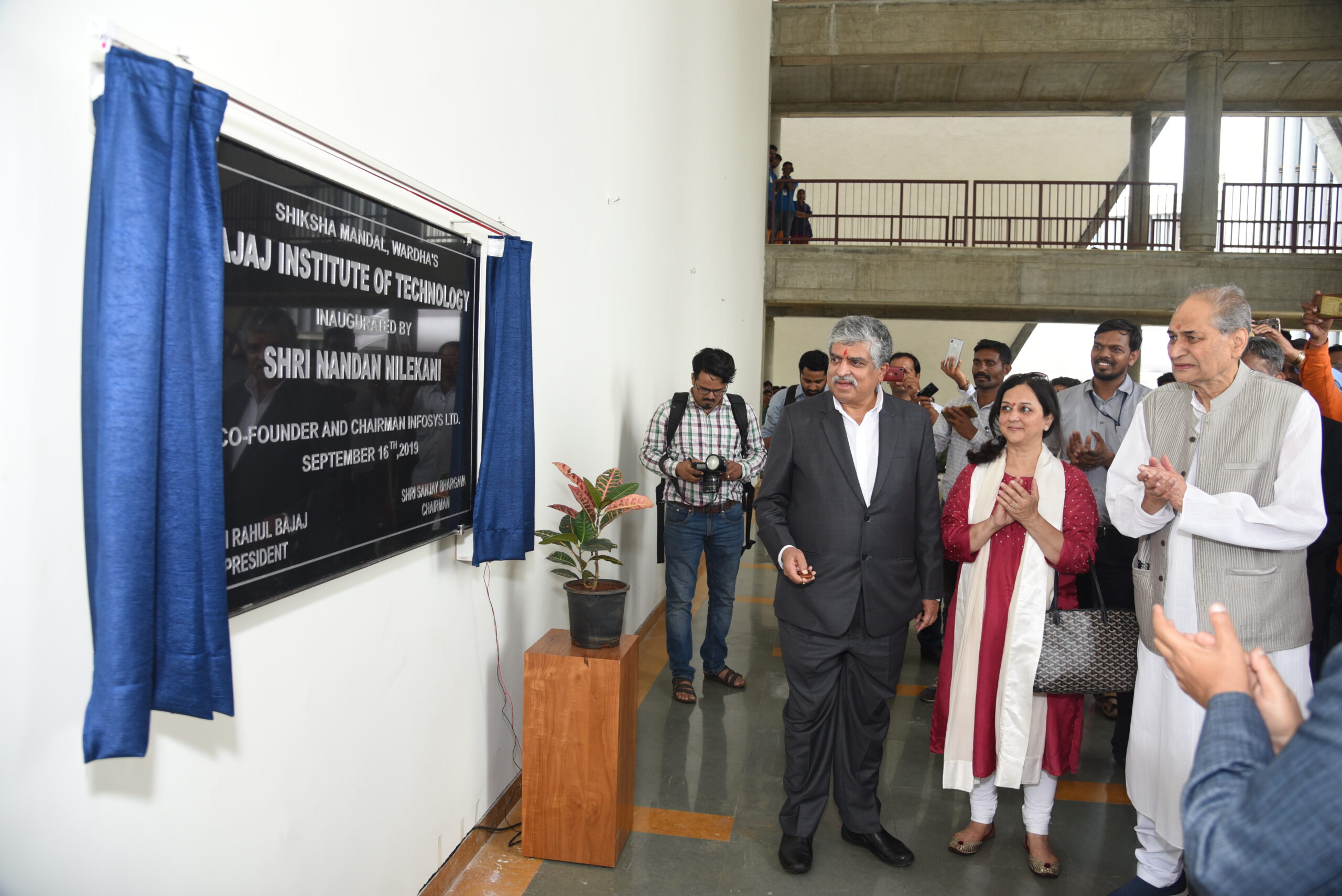 IT icon Mr. Nandan Nilekani officially inaugurated Institute Campus. Speaking on this occasion Mr. Nilekani iterated that Indian youths stand on the doorstep of fantastic opportunities to carve out a bright future for themselves. The trick lies in utilising the technological advantage India has by way of its superior education, superior manpower in a rapidly changing world. “Let us make the best use of the favourable tide,” said the legendary Nandan Nilekani, the father of the Aadhar programme and Chairman of Infosys (of which he also happens to be a co-founder), while inaugurating the brand new campus of the Bajaj Institute of Technology (BIT) at Pipri-Wardha.

Another industrial icon of India, Shri. Rahul Bajaj, the Non-Executive Chairman of the Bajaj Group and President of Shiksha Mandal, was in the chair, with Rohini Nilekani; Shekhar Bajaj, Chairman of Bajaj Electrical Ltd; Sanjay Bhargava, Chairman of Shiksha Mandal and Dr. Narendra Kanhe, Principal of the institution on the dais, in the sprawling plaza. Neeraj Bajaj, former world-class table tennis player and a scion of the Bajaj family, also graced the occasion. Nandan Nilekani highlighted the massive technological progress humankind has made. “But the freshest impetus came when Apple introduced i-Phone that revolutionized the manner in which smartphones became available to everybody and anybody. This is no mean a development and our youth would do well to understand what that means,” Nilekani stressed. However, the real challenge India must handle well is to utilize its human capital in the best possible manner, in tune with the technological advantage. “I am sure, this wonderful institution of yours will play a lead role in this national effort,” Nilekani added. Nandan Nilekani’s assertive appreciation of the opportunities available invited repeated applause from the students of the BIT. In his introductory address, Rahul Bajaj talked of the vision that propelled the Bajaj Group to conceptualize the Institute. As he welcomed Nandan and Rohini Nilekani, Rahul Bajaj stressed how important it was for the BIT to have them at the inaugural of the campus. “Wardha has a special place in our thought, and now the BIT has added much value to our effort,” he said in the welcome address,

Sanjay Bhargava traced in short what kind of work had gone into making of the BIT. The vision is to make the BIT a national leader in technological education in the shortest possible time. “Our students are already doing well in various segments. We will continue the effort with greater focus,” he said. As he proposed a vote of thanks, Dr Narendra Kanhe repeated the resolve to make the BIT a leader in technology-education.

At the start of event, various persons who contributed to making of the impressive campus were felicitated by Nandan Nilekani and Rahul Bajaj. Among them was Cristopher Charles Benninger, the iconic architect who designed the campus. The campus is unique in many ways. It offers an easy utilitarian space well suited for an institution of higher learning. Its grand facade has an element of invitation to learners to excel. Benninger has also designed many other Bajaj projects. Later, Nandan Nilekani interacted with students of BIT in which students asked him many questions related to career in Information and Technology and his success stories. He appreciated the quality of the questions asked by the students. He wished Bajaj Institute of Technology, a very bright future ahead.